I want these cupcakes.

Check out more of this awesome-ness. http://vpennyw.blogspot.com/2011/02/firefly-cupcakes.html 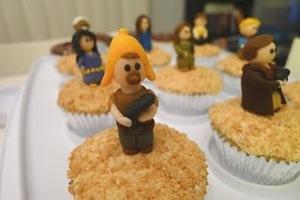 This keeps cracking me up.

So, the other night, I visited with my Nephew, who just had his tonsils out.

As can be expected, a three year old who doesn’t feel well is a bit cranky.

He informed us that he was going to walk home. (Long, LONG walk that would be!)

He got fussy. He started to cry. He wanted to GO HOME.

So he needed some distraction.

I had been in the area from attending a continuing legal education seminar that day with the Ohio Prosecuting Attorneys Association. I’d forgotten to take my name tag off before I went into the hospital. So I asked him if he remembered what Aunt Addie does at work.

His eyes got real big. “OOOOHHHH.”

“I spent today with a bunch of other Bad Guy Locker-Uppers.”

“So we can learn new ways to catch bad guys.”

“Because if someone figures out a new way to catch bad guys, it helps if we tell others how we did it, so that they can go catch bad guy themselves.”

“Ooohhhh.”  He seemed impressed.  And then it was on to something else.

And he was distracted from his fussiness. We talked about his Mater socks. I had brought him a tractor to play with. He ate a popsicle. We talked about his Lego videogame. The nurse told him about a play area at the hospital. He asked for some iced tea. (Yeah, really. I can’t believe how much that kid likes tea.)

I’d like him to understand that being a prosecutor isn’t about conviction rates, or trial wins, or notches on a proverbial trial “belt”, or the number of people behind bars; because it’s really not. There’s no way he’s going to get that yet.

And getting him to understand that I’m not the one “catching” them? Well, I’ve tried telling him that the police catch them and I take them to court. That doesn’t seem to be getting through. The idea of me actually trying to physically catch them? Funny, since I’m a clutz. Big time.

That’s a bit much for a three year old. We’ll stick to “catch bad guys” for now. More will come later.

How have we explained other jobs?

Well, he and I once talked about his mommy helping sick people feel better (nurse). We talked about his uncle (Brother) helping people stretch (physical therapist). We talked about Paw-Paw (my father) making food for animals (runs a feed mill and farm supply company).  I’m sure they’d explain more and more about their jobs as he gets older and better able to understand.

How do you explain people’s jobs to a young kid? Got a good one? Leave it in the comments!

When I was a kid, my dad’s birthday and one of my parents’ friend’s birthdays were very close in time. We’d get together at some point in between the birthdays for a cookout and cake and ice cream.

My dad’s favorite cake is red velvet cake. Not with the cream cheese frosting, but with the actual Waldorf Astoria frosting. Mom always made homemade ice cream to go with it.

We’d go to the friends’ house, Mom would make the cake and ice cream; they’d supply the grill bits and other stuff.

The other family had four kids; the oldest was my brother’s age. My sister and I were both older than they were, but we both babysat for the kids through the years, and even now have many shared memories.

One of those was this yearly barbecue.

One of the first times we did this cookout, EVERYONE ended up with the stomach flu within 24-48 hours of the cookout. No one seems to know what it was. It could have been anything, from potato salad sitting out too long that gave us food poisoning to an actual flu bug that hit us all.

At that point, us kids christened the annual cookout the Barf Barbecue. Red velvet cake became known as Barf Cake.

Yeah, not real appetizing is it? But hey, we were kids…we thought it was hilarious.

Over the next few years, we continued to have these cookouts. No one got sick. But the name stuck.

So, fast forward a number of years…

A few weeks ago, I came home from work to find that my garage door opener had spontaneously disassembled itself.

I am absolutely NOT the person who should try to fix this kind of thing alone…I’d probably make it worse. Add to the fact that I was still in a skirt, jacket, and heels from the day job, and not willing to just leave the garage door open for fear that my grill and lawn mower and other things would walk off (which has been a reported problem in our area in the last couple of years); I called Dad for help.

Dad showed up, and together we were able to fix the garage door opener. And I promised baked goods for his help.

He smiled and said no worries, until I brought up the idea of making a red cake. And then he happily accepted.

When I called ’round to invite family to a cookout, they seemed happy. And then I mentioned red cake.

Someone asked if I meant Barf Cake.

Call me crazy…I’m having trouble imbedding the video.

The stress level at Chez King is pretty high at the moment. I’m a public employee. That means that no matter what I say about any part of the current budget issues hitting across the country right now, it’s hard to be unemotional or detached. I’ve definitely got a dog in this fight.

Rather than talk about my own personal situation, or about who’s right or who’s wrong or who’s at fault, or any finger pointing, I thought it interesting to point out a set of articles I saw today.

What does spring mean to you?

It’s also rainstorms and sunny skies, and days that one can sometimes sit out on the back patio of my house with a good book and a glass of wine.

It’s new flowers and NO SNOW.

It also marks the beginning of the conference season…I’m still putting together plans on where I’m headed this year…anyone have suggestions for Ohio-and-vicinity-based writer’s conferences?

If the definition of insanity is doing the same thing over and over again and expecting different results, then all of us writers who submit our work to professional markets are definitely feeling like they’re losing it. Despite that, one has to understand that rejections WILL happen. That’s the way it is. It’s just part of the business. And it isn’t personal.

The mark of a professional writer, however, is to grow a thick skin, and just to keep going, learning what one can from the rejections and implementing changes where appropriate, but not giving up. Giving up will never result in being published.

In other words, have a glass of wine (or Coke, if you’re under 21), a bit of chocolate, and find a way to laugh.

There are times that I tell stories about my cat.

She seriously has learned some commands. If I say “sit”, she sits. If I say “paw”, she lets me shake her paw. (This is a major accomplishment, since up until we mastered this command she had perfected the “I-will-shred-your-hands-and-set-the-world-ablaze” response whenever I tried to touch her feet. This made claw trimming a two person job.) If I say “up”, she sits up. If I hold out my index finger and say “kiss”, she touches her nose to my finger, and then rubs her face along my finger and into my hand for scritches.

But she is a cat. And therefore she is planning to take over the world. And she is starting by bending me to her will.

I am the Keeper of the Food and the Treats. I am also the Keeper of the Dreaded Claw-Trimmer and the Dastardly Grooming Brush. She hates them both, but will put up with them for the aforementioned Food and Treats. That also means putting up with my Stupid Human Tricks and Requests for Training.

Despite this, she wants a rigorous schedule. And when I say schedule, I mean mealtimes. She gets two meals a day; one in the morning, and one in the evening. She wants them on HER terms.

Which means that she wakes me up at unearthly hours of the morning for breakfast. And demands it until I get up and provide it.

And if I walk in the door at night and do not immediately give her attention and dinner, she cries and whines until she is fed. You’d think I was starving her (one look at my fourteen pound terror will abuse you of that notion, but if you hear her crying you would think she was wasting away).

So I had started trying not to feed her right away when I got home; the hope was that if I waited a little later in the evening, that she’d let me sleep a little longer in the morning.

And she became obnoxious.

And began doing things that got her in trouble for the sole purpose of getting my attention until I finally caved and fed her, just in the interest of getting her to calm the heck down so I could get other things done without a perpetual whiny trip hazard under my feet.

Even so, I’d been able to wait an extra hour and a half in the evening before feeding her. I rejoiced, hoping that meant I could sleep in a little long this morning since she’d eaten later the night before.

She woke me up this morning at five a.m. A good hour earlier than I try to start becoming coherent. I tried to roll over and ignore it, but she got louder.

Finally, I put out some treats on the bedspread for her, hoping against hope that getting something in her stomach would shut her up long enough for me to get another hour of sleep. Or five minutes. I’d have settled for five minutes.

She gobbled them up, and whined louder.

After a few more tries of the same pattern, I stumbled downstairs, put food in the bowl, and collapsed under a blanket on the couch.

When Brother came downstairs this morning (he’s temporarily living at my house), he found me half-asleep, face-down on the couch. The Fuzzy Minion was curled up, with a self-satisfied glare, in full purr, on the small of my back, sated and happy at her victory.

Apparently, I have been trained.