Okay, so I promised some time ago to put these up, but I just hadn’t quite gotten there yet.  And since they’re doing this again on May 15, I hope this gives you some idea of how much fun we had, and a desire to go and check things out! www.daytonwinetrail.com

And this is not a comment on the taste or quality of any of the products here…the labels just cracked us up.

The Squid’s Fist. Because when I think wine…I think squid. And not just any squid, but a squid that actually has a hand and fingers that can make a fist. Yeah, that says a good wine to go with seafood or chicken. Doesn’t it say that to you?

I have a hard time equating good wine with something that even Jules Verne couldn’t dream up.

This could be the best wine on the planet. I can’t stop trying to picture how a squid makes a fist.

Menage A Trois. Is this some way of saying that wine is supposed to dictate bedroom behavior?

I couldn’t take this seriously. Yeah, I know. We were cracking up like a couple of really immature grade school kids who laugh at fart jokes.

But seriously, are you really thinking about whether this is a good dessert wine, or what kind of taste it leaves on the palate? Nope. I’m wanting to know what the marketing campaign is going to be.

And the wine labels weren’t the only crazy thing. The beer labels had us going too.

I’m sure we all know people we’d like to give this to, especially if it cures Arrogant Bastard tendencies.  And does the fact that it’s oaked make it extra strength or something?

Someone told me that this stuff is actually pretty good. I can’t get past the label. And how would you give a six pack of this to someone with a straight face? Much less serve a bottle of it to a guest in your house? Wouldn’t they think you were trying to make some kind of statement about their personality? 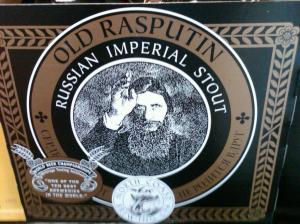 Old Rasputin Russian Imperial Stout. And, because nothing says beer like crusty, unwashed Russian holy men/crazy men/however you’d like to classify this nutball.

Seriously? Because I’d worry that this would turn me into a crazy Russian religious maniac who didn’t bathe, didn’t shave, and thought he was God’s gift to the world. And women.

Although, they did have to shoot him, stab him, strangle him, poison him, and drown him before he actually died. Even so, I would definitely give up the whole Holy Man of Steel concept for regular bathing. I just can’t handle the not-bathing thing.

Again, might be great beer. I just can’t figure out what the ad campaign would be. And that’s really what’s keeping me from trying it.

These are really the pick of the litter here. I’ll post more great alcohol labels as I find them. Enjoy!