So, I’ve been on a bit of a blogging hiatus lately while real world and real life stuff has been taking over. If you follow me on Facebook, you know that I’ve given birth to a daughter, Olivia, and am home on maternity leave. I’m learning how to blog and type with a highly cranky infant glued to my chest (and I don’t mean just to eat, but wanting Mommy All.The.Time.)

While I’m getting settled into the new reality of learning to be productive and a good mom (or at least a mom that gets some of it done and some of it right some of the time), I’ve got an interesting post for you from my friend, Terry Ervin.

Terry and I live in the same area of West Central Ohio, just a few miles (about fifteen) apart, and we both enjoy science fiction and fantasy. In fact, we end up talking at different local book events all of the time about the genre, about publishing, and about a whole lot of other things. It was interesting to see his take on this topic, one we’ve discussed before. Also, Terry’s got a new book out there, so go check it out and see what he’s up to. Here’s Terry…

Fantasy and Science Fiction: Good for Movies but Not So Much for Books?

What got me thinking about this topic? Talking to teen readers I’ve met at libraries, book festivals and similar events.

It started a while back with conversations similar to this:

Teen: Shrugs. “I liked the Lord of the Rings movies. Did you see them?”

Me: “Yes, They were pretty neat.” Smiling, I continue. “I’m an author, so I have to ask, did you read the trilogy?”

Teen: With a shake of the head, frowns. “I tried reading the first book. I couldn’t get into it. I don’t like reading fantasy.”

To tell the truth, I’ve read the Lord of the Rings trilogy. There were parts that were difficult to get through. They were written for another time, possibly a different audience.

Me: “What do you think of science fiction?”

Teen: “Yeah, but I don’t like reading science fiction either.”

Me: “Maybe fantasy and science fiction aren’t for you. Or maybe you’ve tried the wrong books?”

Sure, fantasy has elves and orcs, dragons and wizards. But fantasy also has vampires and fairies…and superheroes and ghosts, and more. My novels? They have earth wizards battling panzers, and Stukas engaged in aerial combat with fire breathing dragons. (Yes, I’m sort of a World War II history buff)

Science fiction? It’s as varied as fantasy, if not more. It has space ships and wormholes, aliens and androids, time travel and pandemic viral diseases, dinosaurs and, well, the sky…or the rim of the galaxy is the limit. My SF novels? They have brass knuckles and shotguns mixed with magnetic pulse pistols and taskforce sized space battles, and alien species like the Umbelgarri, Chicher, Crax and V’gun.

Are you interested in reading but not sure about Fantasy and SF? Like any other novel, they can have humor and romance, mystery and revenge, horror, hate and redemption, heroines, heroes and villains, average guys and gals, treachery and…well, you name it, even talking frog princes. (aside from Addie…yes, they can! wink, wink).

My first serious dip into SF was in grade school and Jr. High, where I read “A Pail of Air” by Fritz Leiber and “A Sound of Thunder” by Ray Bradbury. Through them my mind began asking questions, about the survival of humanity, and the consequences of traveling back in time.

Then, I read The Sword of Shannara by Terry Brooks. Some might say it’s sort of like ‘Lord of the Rings light.’ That opened the door to Lord Foul’s Bane and the rest of the Thomas Covenant, the Unbeliever books by Stephen R. Donaldson.

Those titles just rang for me. Does that mean they’re right for you? Maybe. And maybe not. Just like The Lord of the Rings trilogy…they’re good books, ones that have withstood the test of time, but aren’t for everyone.

Teen: Holds up a copy of Flank Hawk. “So what movie is this book like?”

Me: “It’s like Lord of the Rings meets Gettysburg, meets Saving Private Ryan.”

Teen: Points to a copy of Relic Tech. “And this one?”

Me: “Babylon 5 meets Starship Troopers, meets The Rockford Files.” I smile. “You might have to look a few of those shows up. They’re good…almost as good as my novel.”

My advice? Don’t automatically turn away from fantasy and science fiction. Take a look at the cover, and read the back of the book, and maybe a few pages. Look up reviews if you’re so inclined. With the vast variety of stories fantasy and SF encompass, there’s certain to be something in there for you, something to challenge you…capture your imagination like nothing ever has before.

In addition to writing novels, Terry’s short stories have appeared in over a dozen anthologies, magazines and ezines. Genre Shotgun is a collection containing all of his previously published short stories.

To contact Terry or learn more about his writing endeavors, visit his website at www.ervin-author.com and his blog, Up Around the Corner at uparoundthecorner.blogspot.com 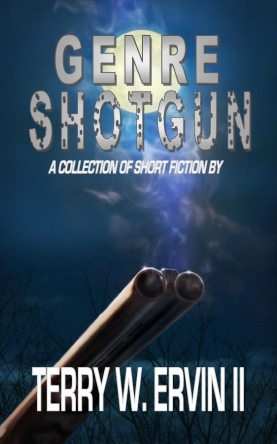